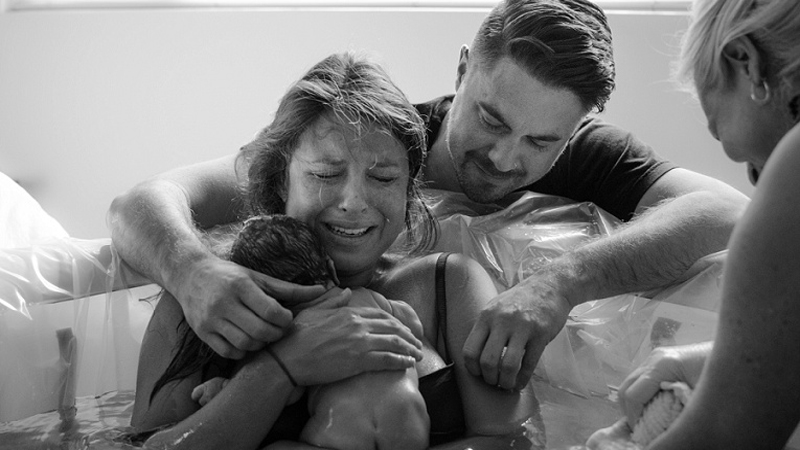 Beacon’s birth was unlike my first two. With my first I had a few surges, then my water broke and 5 hours later she was born in the birthing tub. My second, I woke at 6:15am with a surge and my son was born 1.5 hours later. We did not have time to fill the tub, I didn’t even have time to prepare my bed, so I delivered him standing at my bathroom sink. His birth was so quick he was stunned and wasn’t breathing, he was resuscitated and we were transferred to the hospital where we had to stay in the NICU for 3 days. It wasn’t the birth experience we planned for and we were pretty traumatized by it. Beacon’s birth was something else entirely.

I already had a couple false alarms with labor starting and stopping before his due date arrived. The morning of his due date, the 4th of July, I woke at 6am with surges. I was used to fast labors so I was ready to call my midwife but since I had already called her out once in the middle of the night, I wanted to wait and make sure this was real labor. By 10:45am my surges were 20-15 minutes apart and quite intense so my midwife came out to see me. Of course in the 45 minutes she was with me I had no surges. She checked me and I was at 4cm. She said to go about my day and call her when surges were closer to 5 minutes apart. She also said she would be at the movies from 1-3:30 but to not hesitate to page her. By 2pm surges were 5 minutes apart but I felt so bad for calling her to come over twice already that I told Joe to wait until 3:30pm to call her. He paged her at 3:30pm while I lay on my side in bed moaning through surges and listening to my hypnobirthing track , “Rainbow Relaxation”, on repeat. Joe filled the tub and our birthing team and Alanna were in our room 20 minutes later. Midwife Kaydee was the first one to greet me. She very gently touched my hip and side to let me know she was there to support me and I felt so comforted. “That feels good” I told her.

I got in the tub around 3:50pm. As soon as I got in I felt a lot of relief “This feels so much better” I said. A surge washed over me and at 3:58 when I felt the next surge coming I asked “Can I push now?” and Midwife Michelle told me I could if I felt ready. So I did and my water broke. Baby’s head came with the next push and baby was delivered with the third push at 4:04pm.

I caught my baby and pulled him out of the water and to my chest as I leaned back against the birth tub. “I’m so glad that is over” I said with a smile as I looked at Joe. Then I held up my baby to inspect the sex “it’s a boy” and I began to cry and so did my baby; big, loud, hearty cries that told me he was healthy and strong.

Joe and I wept and wept tears of joy and relief that he was finally here, and everything went perfectly, and he was healthy, and he was such a wonderful surprise because I was SURE I was having a girl. It was a perfect moment.

A little while later my two older kids came up to meet their new baby brother. They went downstairs and made a birthday cake with their aunt while baby and I were checked.

A little later they brought the cake up and our little family and our whole birthing team sang Beacon his first “Happy Birthday” song. It was so special.

And the best part was everyone was still able to make it back to their BBQs in time for their 4th of July fireworks! We were so thankful to have such a positive birthing experience.

The Birth of Selah Ciervo

The Birth Story of Evangelene Dominica